Having the privilege of staying at the hotel at the Shaolin Temple, we had the opportunity to explore the grounds. The Pagodas Shaolin Temple were one of the most fascinating areas there.

I am sure if you have ever watched a Shaolin Kung Fu movie you would have seen famous actors flying from one Pagoda to the next mid air, but have you ever wondered what they actually are?

Each Pagoda represents the burial place of a high ranking Monk. The larger the Pagoda the more highly ranked that particular monk was.

Early one morning Sifu decided to do a Lohan Qigong session here, since the Shaolin Temple was the birthplace of the Lohan Qigong it only seemed fitting. As the sun rose, he made his way to this spiritual spot, on his travels one particular Pagoda caught his interest, it had a very interesting energy and he recounted having a wave of Goosebumps come over him. He decided this would be where he did his training that morning. He said it was one of the most intense training sessions, as if the energy of the Temple came through in the practice. 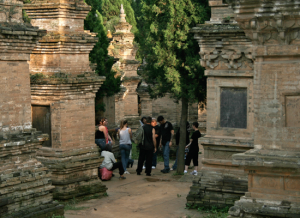 This is the place where Shaolin Kung Fu movies were shot

I have always believed that a location which has been used for the same thing for hundreds or thousands of years can build up a residue energy – perhaps it is actually a tangible thing.

The Moment The World Stood Still at Qingcheng Mountain