Read this article: What is was like training with Bruce Lee in 1959

Stories You May Not Have Heard

Master Vince and Dave Lacey (Sifu George Michielsen’s Sifus) moved to an old four bedroom apartment in Tsim Sha Tsui during the year of 1953 with their mother. In total there were 13 people living within this space sharing one bathroom, toilet and kitchen.

Bruce Lee at this stage resided only a few blocks away on Nathan Road in Kowloon and it was not until 1958 when their mother enrolled both of the children to St Francis Xavier College that they met Bruce Lee. The college was renowned to be one of the roughest Catholic all boys schools in Kowloon.

Bruce Lee and the Lacey brothers began to form a close friendship and shared a common interest in Martial Arts, particularly Wing Chun at the time. They began training together on an apartment rooftop located one mile from St Francis College on the corner of Nathan and Waterloo road in the Mong Kok district.

The Lacey brothers said that Bruce Lee loved to be the centre of attention and always had an audience of students surrounding him whilst he practiced and displayed his marital arts. “Bruce Lee could kick over your head quite fast, but his favorite kicks were the low Wing Chun kicks to the shins and knees”.

The Lacey brothers trained under Bruce Lee for one year and during this time Bruce Lee had won the Inter-School boxing tournament against Douglas Elms (who was from a school for British students only). There were no public parks or backyards and so all the private ‘Gong Sau’ (talk with your hands) challenge matches were held on rooftops of apartment buildings. At the time Bruce had short cut hair and wore glasses. He loved to wear black leather shoes as they were a deadly weapon for kicking.

In 1959, Bruce Lee’s father sent him to move to the United States as he was involved in too much trouble and was attracting negative attention from local gangs. 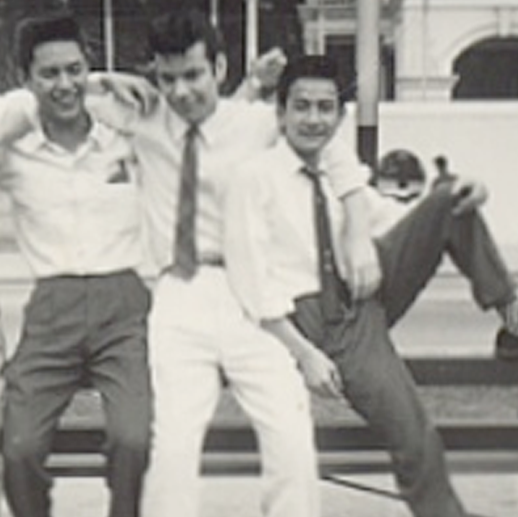 Before Bruce Lee left to America he visited the Lacey brothers at their family apartment with his mutual friend Cris Chan (pictured above on the right) to bid farewell.

His final words to the Lacey brothers were “When I get to America, I will become famous”.