Grandmaster Lay Wing Sung, a martial arts veteran of 56 years, made Kung Fu history in Hong Kong in the early 1960’s. Third generation student of Tarm Sarm, Lay Wing Sung and his brother, Lay Dai Wai were part of a select group of Kung Fu fighters named “The Five Black Panthers of Choy Lay Fut”, he along with the others in the group participated in weekly sparring matches against rival groups. People in Asia still talk about the legendary Choy Lay Fut quintet. 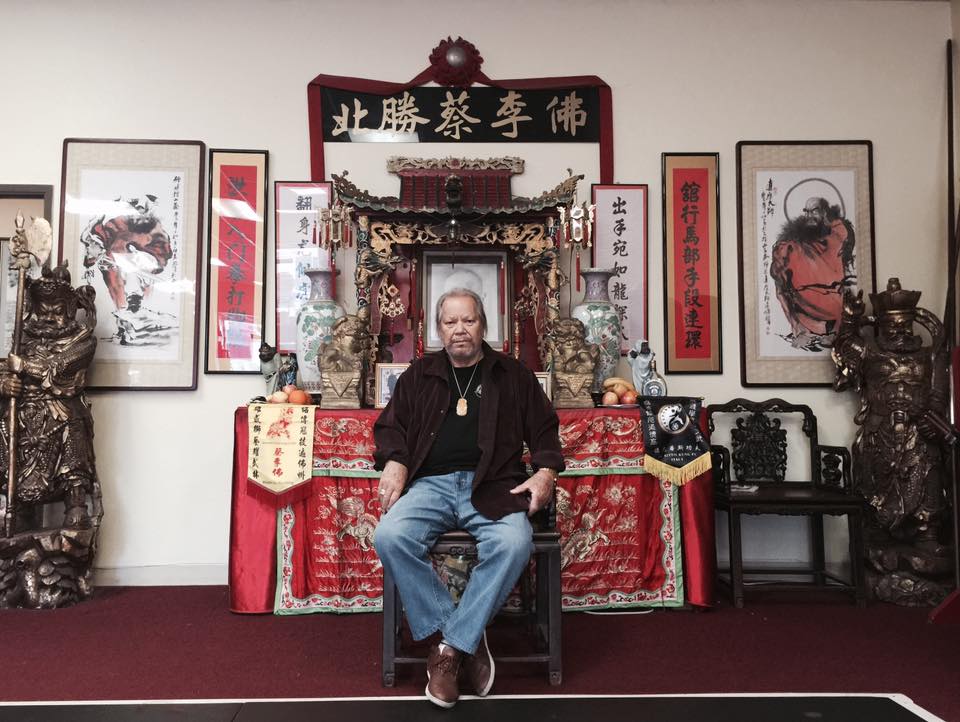 Born of a Chinese mother and an Irish father in the times of the Japanese invasion of China, their father was killed while the boys were still young, their mother raising them in one of the toughest parts of Kowloon.  They grew up with the likes of Bruce Lee and Lai Hung, learning and practicing their martial arts in the streets.  This honed the Lacey twins’ remarkable skills and earned them a place in Chinese Martial Arts history as two of the five Black Panthers of Choy Lay Fut.

Their love of the martial arts started when they were around 17 when they attended the same school as Bruce Lee who was also a young student at St Francis Xavier College.  The school was renown for being one of the toughest in Hong Kong.

The two brother’s soon became good friends with Bruce and for almost a year they trained on the rooftops in the Wing Chun system of Kung Fu .

Bruce then decided to further his schooling in America as he was getting into a lot of trouble in Hong Kong.  Bruce Lee left the Lacey brothers in the hands of some senior students to further their knowledge.

The brothers didn’t get on well with their new Wing Chun teachers and let their training slide.

One day while discussing various Kung Fu styles with a Chinese friend the Lacey brothers were advised to learn Choy Lay Fut, a fighting art renown for it’s aggressiveness and effectiveness against multiple attackers.

The Lacey brothers were impressed with what they had heard and made their minds up immediately that Choy Lay Fut was the fighting style for them.

Their friend arranged for the brothers to meet Lai Hung and after a formal introduction they were accepted as his students.

In that first meeting Lai Hung told them “Choy Lay Fut is an offensive fighting art developed purely for combat, the training is very tough and strenuous those who are weak minded, timid or lazy oriented can never hope to master the style”.

Not long after this training started in Buk Sing Choy Lay Fut, Master Lai Hung had to abandon the training due to heavy constraints on his time.  Master Lai Hung introduced a fellow Buk Sing colleague to the twins, Master Kong Hing.

Master Kong Hing would not only continue the Lacey brothers training in Choy Lay Fut Buk Sing, but they would become life long friends.  The young Master drilled the brothers in basics of Buk Sing, the punches, kicks, fighting techniques and conditioning including “iron palm”.  In those days there were no kicking/punching bags, wooden dummies, weapons or even mirrors. There were maybe two single mattresses and a couple of chairs.

In 1962, Sifu’s Vince and Dave Lacey, immigrated to Australia, Sifu Vince first settling in Darwin where he worked for Qantas Airlines, he trained a few student in kung fu and played in a rock and roll band.

At the end of 1965, the brothers moved to Perth Western Australia.  Master’s Vince and Dave Lacey founded the Australian Buk Sing Gwoon (School) in Perth in 1966 and as such have been instrumental in propagating quality Choy Lay Fut in Australia and more recently overseas.