What Do The Five Animals Represent in 18 Lohan Qigong?

Read this article: What Do The Five Animals Represent in 18 Lohan Qigong?

Did you know the Five Animals Represent in 18 Lohan Qigong?

The internal side of the form is said to cultivate what are known as the three fundamental elements of being, the Chi (energy), Jing (essence) and Shen (spirit).

The 173 movements from the Lohan Qigong is collectively called the five animal forms of the Dragon, Tiger, Leopard, Snake and Crane.

The name reflects the importance the ancients placed upon the imitation of animal movements in the exercises. 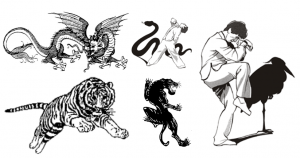 Symbolically speaking it is said that the movements of the Dragon cultivate the spirit (Shen), the tiger toughen’s the muscles and hardens the bones, the Leopard increases one’s vigour and strength, the Snake activates the life vital energy (Chi) and the Crane gathers one’s essence (Jing).

It is said the movements of the Tiger and the Leopard reflect and work in the physical realm, the Snake and the Crane in the mental realm and the Dragon, a mythical creature, in the spiritual realm of man’s endeavours to be holistic.